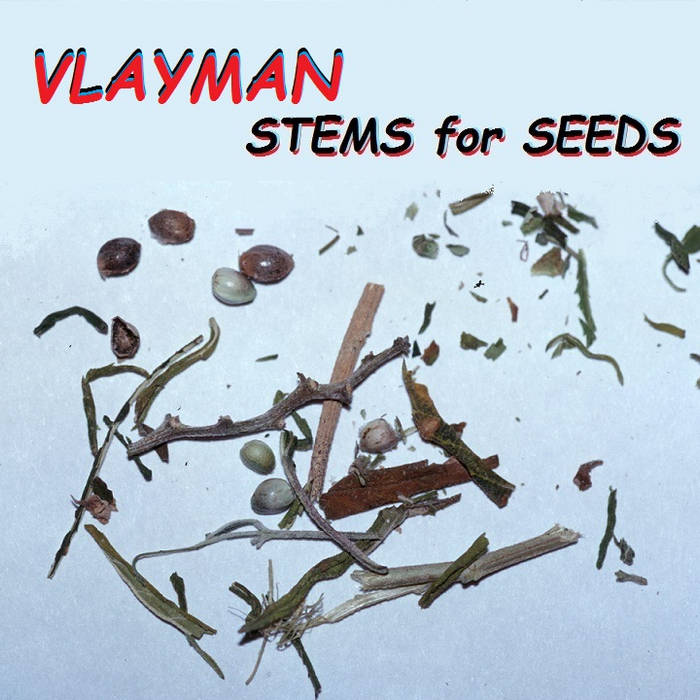 _"Stems for Seeds"" came together when I found a bunch of drums stems on the 'net, many from video games, mebbe all. I decided I wanted to use the stems as seeds for new songs, almost in demo form, for a band that will probably never form, but I wanted to take seriously.
_I gave myself a weekend to write and record ten songs as they were only to be demos, because I value spontaneity, and also just to be weird.
_I used the drums exactly as downloaded, with no edits, altho' I did do some EQ, limiting, gates, pans and rides. Otherwise, they are as found. Hear a little bit of "clank" on the percussion of "Gamble On"? That's what the gates couldn't catch of ol' Pagey. There's other such artifacts elsewhere - hopefully they are not too distracting.
_In keeping with the demo concept, I decided immediately to use one guitar, one bass with pre-amp and compressor, one guitar amp, my pedal board, two mic's on the amp with the same pre's each track, a single vocal mic and pre and compressor chain.
_Geek alert: the guitar was a MIJ Super Strat, chosen because it was already in a stand in my bedio. The bass was a Hohner 2BA2, chosen because I like it's sound, and I have to fight it some, and because I like the headless design in my tight recording space. All guitar tracks were played through a Hot Rod Deluxe, mic'd with a Sennheiser MD421II into a Focusrite ISA1 as center channel, and an MXL880 (looks like a Royer) ribbon into a Yamaha PM1000 (racked by Digitaldrummer). All guitar tracks but a couple of leads are in Mid/Side, generally with the amp's reverb, altho "Riot" has a plethora of pedals from the board, many songs use the Toadworks Meat boost, and there's a cuppla leads with the Meat, Jr. and a Soul Vibe. The bass is DI'd into a The Brick and a dbx160XT compressor, with the DI split out parallel to a Meek VC3Q for extra bottom. The vocals are all an MXL Genesis tube mic into a Universal Audio 110 Solo, into a Gyraf 1176 clone.
_I started at noon on Saturday and did rough mixes of the drums first, where I had more than a two-mix. Some of the drums tracks came with isolated cymbals, or kick, or snare, but all had tons of bleed; I felt lucky when it was only percussion bleed, although cymbal levels were frequently an issue.
_Next, I wrote the basic outlines of the songs. Five were done with the bass, first; the other five were with the guitar. After those song progression skeletons were completed, I added more guitars, and finished the other bass tracks. I tried to envision the forthcoming vocals, even placing small lead fills (note there is really only "lead guitar" on a couple tunes, two done in mono after the vocals). I then consolidate the tracks, pass-filtered and limited and cleaned 'em up, with some minimal editing of the guitars (only on "Grenade") and no bass edits.
_Next came the vocals, what required lyrics before I could sing. The lyrics were based on the title of each song's original drum tracks, for the really geeky among us. I approached each song separately for this, doing leads and then backing vocals song by song and committing to them before I went to the next.
_95% of the vocals are first take (I redid a set of choruses on one song to get more melody, and I changed 3 words on another) and the same holds true for the bass, and closer to 98% for the guitars.
_I made and had regularly scheduled meals, two pots of coffee, a 1/2 bottle of wine, and 5 martoonies while creating this. I took my kid back and forth to work, and I watched part of a football game, and I slept about six hours.
_I started final mixing (I do mix as I go along - love ITB!) at about 3:30 Sunday afternoon, and I was done by 8:15.
_There ya's have it, then, the demo seeds from the downloaded stems, songs for a band that will probably never exist.

Downloaded drum stems, and me.

Fat, bald and old - could I be anymo' rock-n-roll?
I play guitar, bass, some keys and percussion, and I try to vocalize. I write and record, and I do so obsessively. Also, I like martoonies, a lot, and I raise my kids, whom I also like, a lot.
Look for me at the TapeOp and TalkBass forums, where I'm vvv, or in various bars in the Loop. ... more

Bandcamp Daily  your guide to the world of Bandcamp

Interviews With Butcher Brown and Slauson Malone, plus LP of the week by SAULT.